The Glass Knight – A modern opera in Saffron Walden

Now I have the website up and running, let me catch you up on what I’ve been doing over the last few months.

In February, I recorded some of my favourite current repertoire with the stellar pianist Lucy Colquhoun, at the Royal College of Music Studios. We performed five pieces altogether, by Handel, Mozart, Britten, Donizetti, and Richard Strauss – a lot to cover in one session, but Lucy and I pulled it off! You can listen to them all right now on the Audio & Video page, or on my Soundcloud profile. 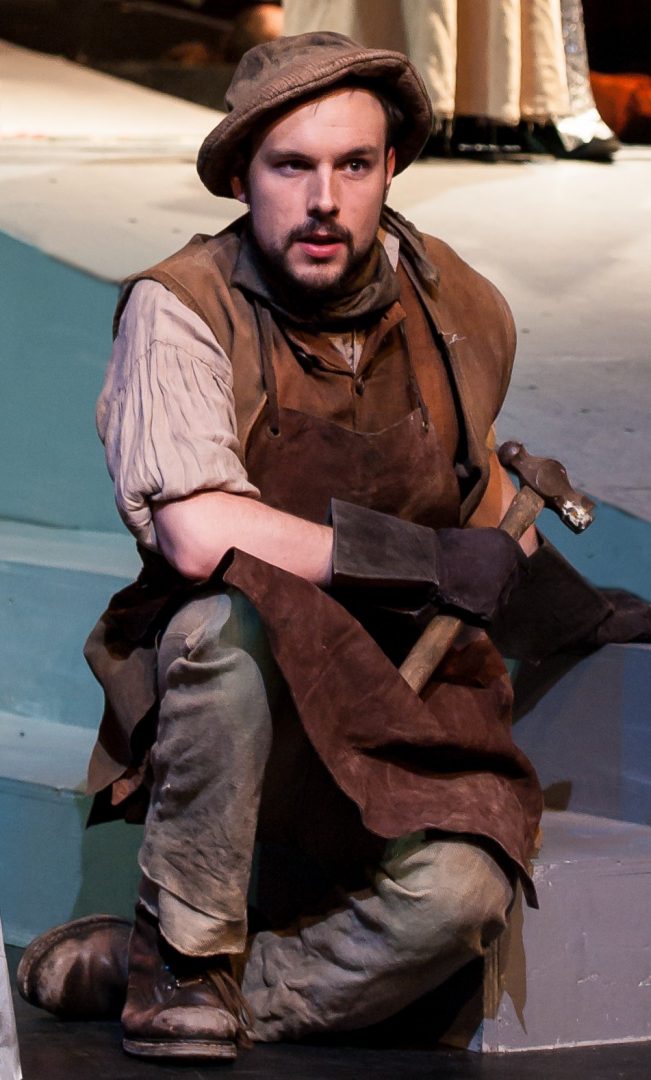 The Glass Knight – a world premiere opera in Saffron Walden

Shortly after the recording, I threw myself into rehearsals for The Glass Knight, a new contemporary opera by Philip Sunderland. It was conceived as an education outreach project, and the whole cast were high school students (along with primary school chorus groups) – over 300 students in all. Even the professional orchestra had added student players. Soprano Monica McGhee (a fellow RCM alumna) and I were the only professional adult principals.

It was performed at Saffron Hall in Saffron Walden, Essex – in fact, the opera was written specifically for this location. There is a legend of a monstrous basilisk which plagued the town of Saffron Walden in mediaeval times, turning the citizens to stone at a merest glance (like in Harry Potter) – until a knight wearing glass armour defeated it by reflecting back its own deadly gaze. I played the town Blacksmith, father of the teenaged heroine, Saffie. I forge the glass armour, and Saffie dons it to save the town. It was an exciting privilege to be the very first singer to create and inhabit this principal role on stage.

Philip himself was conducting, which gave me a rare chance to work directly with a composer, and discover his thoughts and intentions. He was very flexible, constantly working with the students, changing vocal lines where necessary to suit their voices. Phil has a real talent for writing music that is both accessible and interesting, both challenging and rewarding – a balance that is hard to hit. The text, by poet Gareth Prior, was equally excellent.

The energy onstage during and after the shows was extraordinary – a stage full of teenagers and children, genuinely excited about opera! Who would have thought it? In gaps in rehearsal, Monica and I would give vocal coaching to some of the students playing principal roles, and I have to say, I was impressed with how quickly they picked up and integrated our feedback. It was an incredibly rewarding experience, bringing the joy and magic of opera to so many young people who otherwise may never have encountered it. 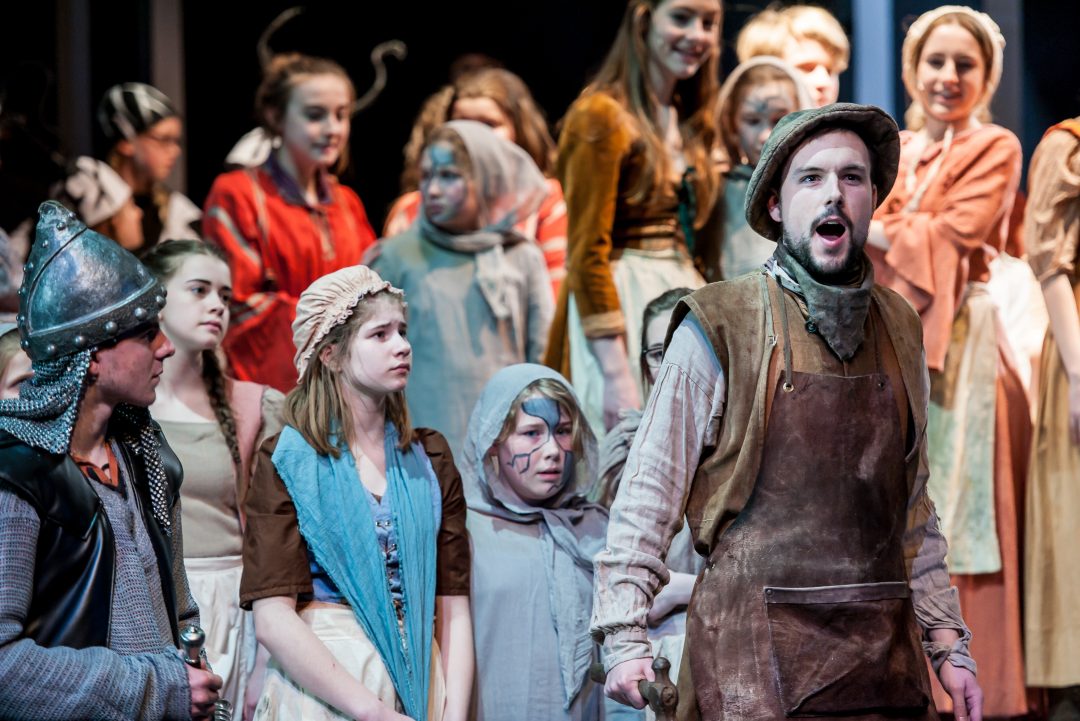 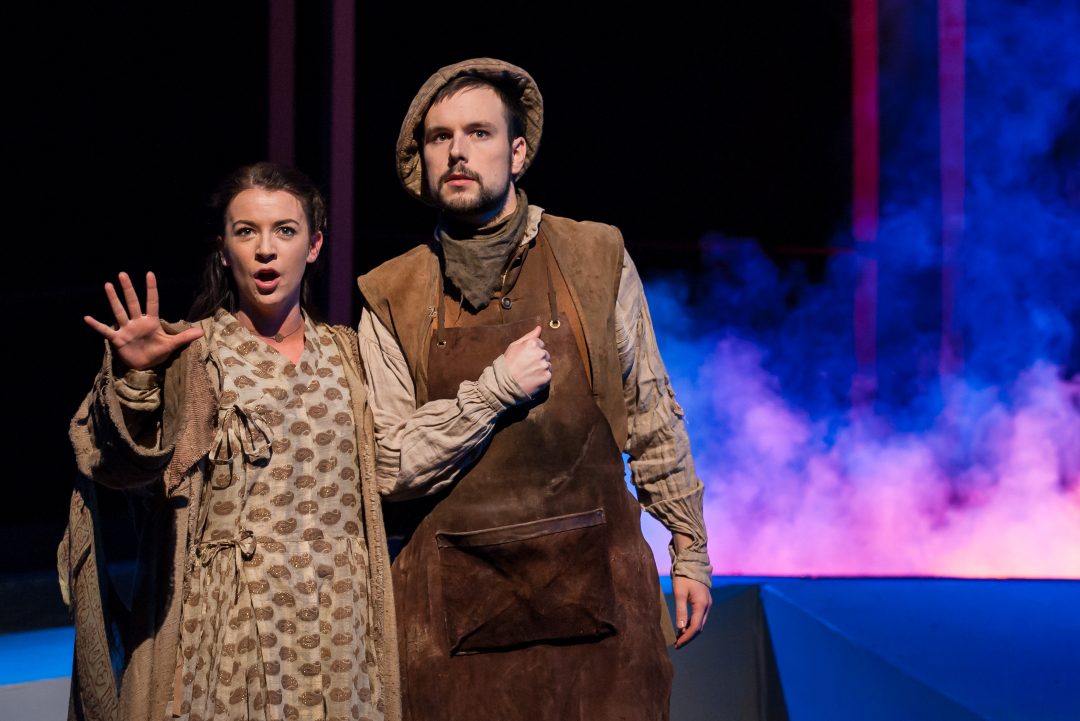 While endlessly ploughing a furrow between London and Essex, I managed to find time to perform the baritone solos in Haydn’s The Seasons with the South Somerset Choral Society. The concert went well, and it was a pleasure to get to visit such a beautiful part of the UK. It took place in one of the oldest churches in the area, truly a wonderful piece of history – see the photo opposite.

Photo: St Mary’s Church, Chard, where I performed The Seasons. 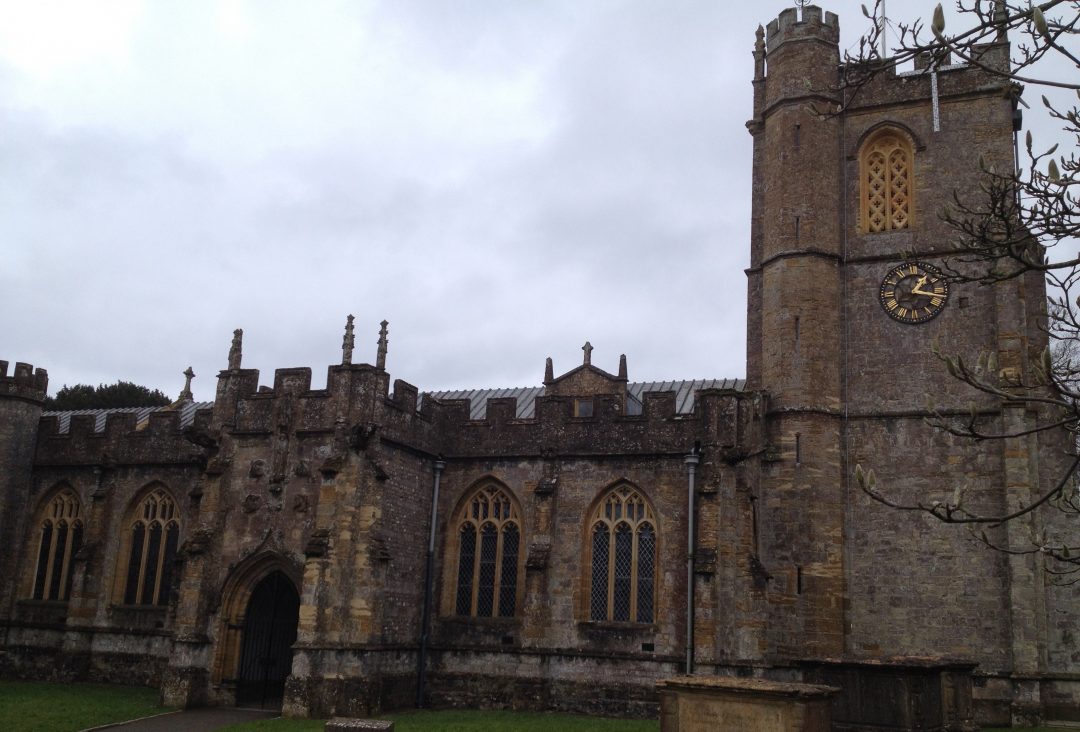 This week, I am very excited to be singing in a wonderful RCM project: two days of workshops focusing on the recitatives of Mozart’s Così Fan Tutte, taken by the legendary Sir Thomas Allen! We are rehearsing every recitative in the whole opera with him, while he directs us and gives us feedback. It has meant spending a lot of time learning music and words (I am playing Don Alfonso, and he sure has a lot to say!). We’ve just had day one today – Sir Thomas is famous for his portrayal of Don Alfonso, so it is a treat to work with and learn from him. I’m afraid that this event is not public, but I will be sure to post an update about it afterwards.

Later this month, I have the privilege of working with another big name in the classical music industry, conductor Vladimir Jurowski (principal conductor of the London Symphony Orchestra). I will sing the baritone solos in a concert performance of Stravinsky’s ballet Pulcinella, with the RCM Symphony Orchestra – details here. A few days before that, I will be in Suffolk singing more Haydn, this time The Creation with the Burgess Hill Choral Society. It is a truly beautiful work, and one of my favourite pieces of oratorio. Do check it out if you’re in the area.

I am also currently in the midst of rehearsals for the Royal College of Music’s Contemporary Opera season – a collection of five short operas by RCM postgraduate composition students, based around the theme of Dostoyevski’s Crime and Punishment. I have principal roles in three of the operas: I play a King, a President, and the personification of Fear – quite a trio! Performance dates and further details are here.

That’s all for now – better get back to learning music! I will be sure to keep you all posted with events as they unfold. If you’d like to get in touch, feel free to send me a message on Facebook or Twitter, or email kieran@kieranrayner.com.